Season Seven of Scrubs originally aired between October 2007 and May 2008 on NBC. It averaged 6.38 million viewers per episode, and received one Emmy nomination. Season Seven was to be the final season of Scrubs. It is available on DVD in regions 1, 2, & 4; and episodes are syndicated in most major markets.

Due to the 2007 Writers Guild of America strike only 12 out of the 18 episodes ordered were made, and only 11 aired. NBC also decided not to finish the full 18 episode billing, thus causing the episode "My Commitment" to be uncompleted. Bill Lawrence decided not to create a sudden ending and put the pressure on NBC to make the remaining six episodes. NBC decided against doing this, and decided to leave it after 12 episodes. After all eleven episodes aired, ABC picked up Scrubs for Season Eight.

At the beginning of J.D.'s seventh year, he makes a vow to himself to be less self destructive, as Elliot calls off the wedding with Keith. ("My Own Worst Enemy") Soon after, Sam Perry Gilligan Dorian is born to Kim and J.D., and J.D. commits to stay with Kim. ("My Hard Labor") Dan visits J.D. at the hospital and surprises J.D. with his newfound success. ("My Inconvenient Truth") Vowing to change and act like more of an adult, J.D. learns all but one of the employees names at Sacred Heart. ("My Identity Crisis") As J.D. raises Sam and Turk raises Izzy, ("My Growing Pains") J.D. finds himself rated as the top doctor at Sacred Heart by the patients. ("My Number One Doctor") Turk has a rough couple of weeks when he learns Spanish ("My Bad Too") and takes out his hyper-masculinity on J.D. ("My Manhood")

Dr. Kelso is found to be too old to keep his job as Chief of Medicine, but when the board extends his career, he retires. ("My Dumb Luck") J.D. and Elliot take initiative to track down a former patient, and talk once again about having a life together. ("My Waste of Time") The two doctors nearly kiss yet again, and are left uncertain about how their relationship will pan out in the future. ("My Princess") 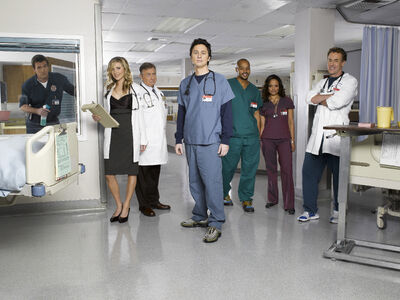 The episode "My Princess" was nominated for the following Emmy: 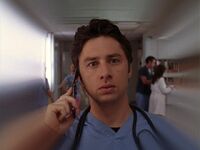 "My Own Worst Enemy" October 25, 2007
Directed by: Bill Lawrence - Written by: Neil Goldman and Garrett Donovan 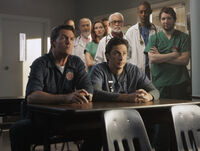 "My Number One Doctor" December 6, 2007
Directed by: Will Mackenzie - Written by: Janae Bakken

"My Bad Too" April 10, 2008
Directed by: Linda Mendoza - Written by: Clarence Livingston 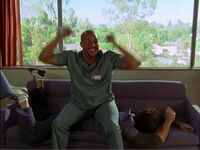 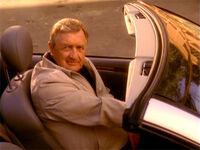 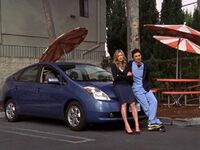 The seventh season of Scrubs, although short, contained many songs by talented artists, including Say Anything, Colin Hay, Trik Turner, The Who, Pete Yorn, Jump Little Children, Ben Lee, Modest Mouse, and many more.

The complete seventh season of Scrubs was released onto DVD in region one on November 11, 2008. The two disc set includes all 11 episodes, plus the following special features:

Retrieved from "https://scrubs.fandom.com/wiki/Season_Seven?oldid=72767"
Community content is available under CC-BY-SA unless otherwise noted.