“It is now time to join these two, as only the creator can.”— Van

"My Soul on Fire, Part 2" is the fifteenth episode of Scrubs' eighth season. Janitor and Lady get married in the Bahamas. Carla makes time for Turk, while Jordan makes a confession to Perry. Elliot accepts J.D.'s profession of love.

Facing the arguments that started the previous day, the couples from Sacred Heart aren't having the best vacation they would like in the Bahamas. The Janitor has problems of his own - he must now organize a wedding ceremony. He asks Todd to find a Justice of the Peace at an emergency international Brain Trust meeting, with new member Ira. Later, Todd introduces Janitor to Van, an old buddy who let Todd practice rectal exams on him in medical school. At the wedding ceremony Janitor requested that everybody stand while he and Lady sat. Van did a terrible job leading the wedding by listing pitfalls he and his wife encountered when they were married. In the end, Janitor tells Lady that he loves her because she accepts him for who he is, in all his weirdness.

J.D. acts as if it is Elliot's fault that she is upset, after promising him there would be no more drama. She tells him that there is drama in every relationship, and he will need to be romantic to her if he truly loves her. Turk tells the same to Carla, complaining that she is too busy being a mother to love him by providing good sex. This angers Carla who blames him for acting as a child, yet furthering her role as a mother. Perry tells Jordan that he truly loves her and enjoys her company, but Jordan is reluctant to leave their bitterness behind. After the wedding, Carla finds some time to set aside to spend romantically with Turk. At the bar, Jordan tells Perry that when Perry is around she enjoys life more, which makes him happy. On a pier, J.D. opens his heart to Elliot, telling her that he loves her more than he ever thought he could love anybody, and that he loves her more than he loves Turk. He then gives her Turk's tiki necklace and the two kiss during a Bahamian sunset.

Kelso, and back at Sacred Heart

At the bar of the resort, Bob drinks Bahama Mamas all day long, and even sleeps at the bar. He misses the wedding because he is drinking the delicious beverage. Ted tries to not wear sunblock into the sun for mere seconds and gets severely burned. Back at Sacred Heart, Doug locks himself in a morgue drawer when he finds out that he wasn't invited to the Bahamas for the wedding.

The Janitor is still mad at J.D. for convincing everyone to come to the wedding on such short notice. To punish him he tapes fish to his hands on top of a lighthouse. Seagulls attack him, wrecking his shirt for the wedding and covering him in seagull poop.

At the wedding, J.D. gets excited because Van twice starts to say the Janitor's real name, but a high-tide five by Todd and an exclamation of pain by Ted prevent him from doing so.

Credited but did not appear

“Well that's about right. And you're naked. Perfect.”— Perry

“It's not a real wedding! It's a crazy cleaning person's scam for presents.”— J.D.

“Nice hat. Does it come in human size?”— Perry

“I'm not a strong public speaker, nor am I that familiar with the Bible.”— Van

“I know I'm weird, but you'd be weird too if your mother aged backwards like mine did.”— Janitor

“Alright then, it is now time to join these two as only the Creator can.”— Van 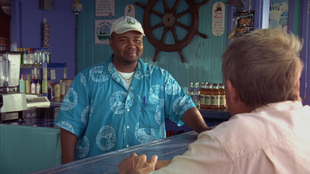 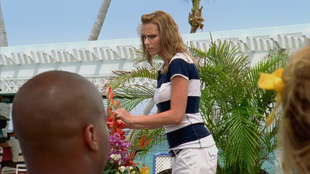 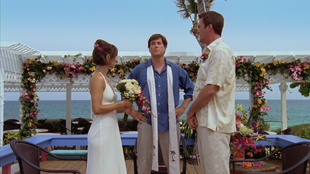 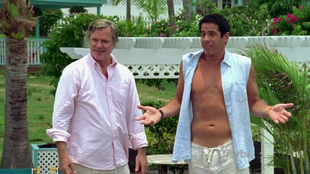 The Todd and his old Medical School Professor 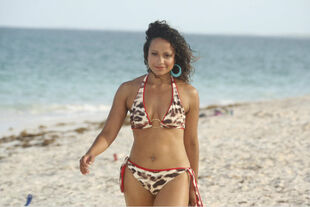 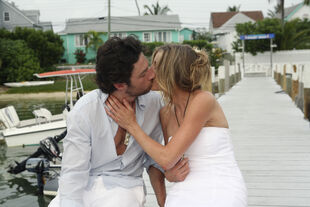