“I was obsessed with getting those organs.”— Dr. Cox

"My Lunch" is the twentieth episode of Scrubs fifth season. J.D. and Dr. Cox run into Jill Tracy (Nicole Sullivan) at the supermarket at lunchtime. Jill dies, and J.D feels bad that he didn't help a person who clearly needed help, Dr. Cox takes J.D out on lunch and comforts him. Jill's organs are donated to three transplant patients, but something goes terribly wrong.

J.D.'s latest goal is to have lunch with Dr. Cox who, in typical fashion, rejects him and heads to the grocery store. J.D. follows him where they encounter a former patient, Jill Tracy, who has been stood up for a date.

A few days later, Jill dies with all signs pointing to suicide via drug overdose. J.D. feels guilty that he, as a doctor, was unable to see the signs she was depressed. Jill's tragedy appears to be good news, however, for three of Dr. Cox's patients in need of organ transplants, one of whom he has grown quite close to. Dr. Cox takes J.D. out to lunch and reminds him that he's not responsible for Jill's death, as she didn't come to the hospital looking for help. Dr. Cox tells J.D. that he can't blame himself for patients' deaths that aren't his fault; once he starts, there's no coming back.

Carla and Elliot speculate the Todd's raucous and inappropriate behavior may be a cover up for homosexuality. They help him come to terms with his sexuality, in an attempt to stop his inappropriate innuendo, but their efforts prove to be futile as he begins directing his inappropriate comments towards men. Elliot and Carla talk to the Todd about his behavior, and it turns out the Todd was scamming the girls with the idea that "chicks dig gay dudes". The Todd walks down the hallway, hitting on at both men and women. The Janitor stops the Todd and asks "What the hell are you?", to which he replies, "I'm The Todd".

Meanwhile, Jill's autopsy reveals she didn't die of an overdose; she died of rabies, meaning all three of Dr. Cox's transplant patients are now infected. Despite their best efforts, the staff is unable to save the first two patients. Dr Cox sits in the break room, trying to cope with his mistake. J.D. offers him lunch, telling him that he too shouldn't blame himself for the patients' deaths. They were in critical condition and would've died in a matter of hours, while the odds of Jill having rabies were so slim that testing for it would have been irresponsible in the time frame available, and Dr. Cox had to make a decision. J.D. says he would have made the same call, which seems to make Dr. Cox feel better.

They are then about to eat their lunch when Dr. Cox is paged for another emergency. Despite resuscitation attempts, the third patient, the one Perry was close to dies, which causes him to have an emotional breakdown. He despondently tells J.D. that the patient wasn't in critical need of a kidney, and his transplant could have waited for another month. J.D. reminds Dr. Cox that the second he starts blaming himself for deaths that aren't his fault there's no coming back, but Dr. Cox says "Yeah, you're right", and leaves the hospital.

“What the hell are you?”— Janitor

“He wasn't about to die, was he, newbie? Could have waited for another month for a kidney.”— Dr. Cox 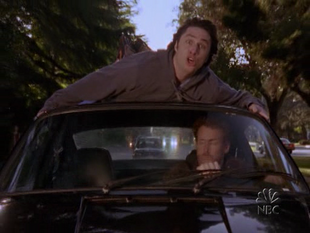 J.D. getting "dropped off" by Dr. Cox 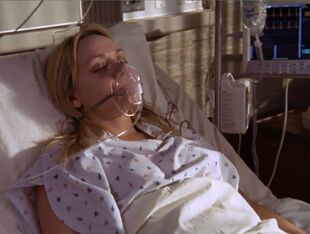 Jill is hospitalized for the final time. 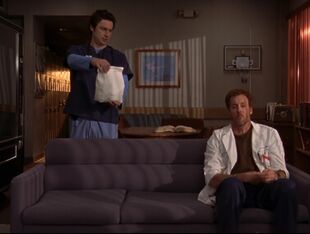 J.D. tries to comfort Cox after losing two of his patients by bringing him lunch 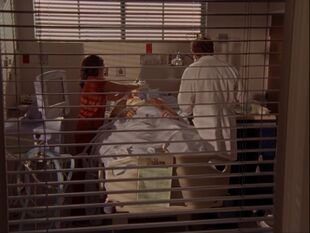 Dr. Cox and Carla unsuccessfully try to save the third and final patient - Dave. 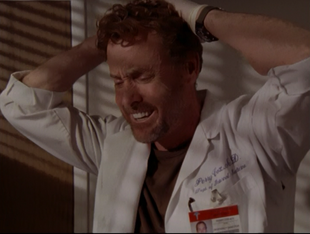 Dr. Cox loses the third final patient - the one he was closest to. 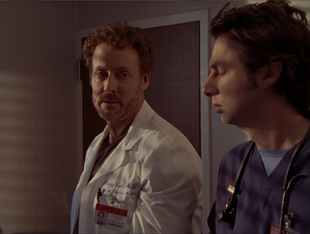 Dr. Cox blames himself for the death of Dave, especially as he wasn't needing a kidney immediately
Season Five Episodes