“Who can tell my that my fantasies won't come true, just this once?”— J.D.

"My Finale" is the eighteenth and final episode of Scrubs' eighth season, and was originally intended to be the series finale. J.D. spends his final day at Sacred Heart Hospital and hopes to find out Janitor's "real" name and Dr. Cox's real feelings toward him. Turk worries over giving J.D. a proper goodbye. Elliot is worried about J.D. being mad over her secretly moving in.

J.D. wakes up to his last day at Sacred Heart and can't help but reminisce about his first day. He then ends up waking Elliot for morning sex. At first she refuses but he guilts her into it when he figures out that she is moving her furniture into his new apartment. Upon arriving at the hospital Turk has a banner with "Goodbye J.D." written on it and he has pads set up for J.D.'s final "Eagle!" While spinning around a bleeding man and a woman arrive and Elliot recommends her to another hospital.

Inside the hospital, Turk realizes that he may have prematurely given J.D. his goodbye. They agree to hug every time they see each other that day. Carla sees this and tells Turk that she has come to terms with Turk hugging J.D. more than he hugs her. She and Elliot then begin hugging and grinding, much to the pleasure of J.D. and Turk. J.D. spots Dr. Cox and Jordan and gives Perry a present: a pleather-bound collection of all of his rants, organized and ranked by how much they emotionally hurt him. Dr. Cox shares a couple: The only way you could be less productive right now is if you were, in fact, the wall on which you're leaning against. ("My Student") and I suppose I could riff a list of things that I care as little about as our last week of residency: every hybrid car, every talk show, everything on the planet, everything in the solar system, everything, everything, everything, everything, everything, everything, every-everything that exists past present & future, in discovered and undiscovered dimensions! and Hugh Jackman! ("My Old Friend's New Friend") J.D. then attempts for a hug but doesn't get one. J.D. then proceeds to diagnose one of his last patients at Sacred Heart, Mrs. Stonewater. She is delusional and her son Dan Stonewater is concerned. J.D. acts a little loopy but promises to figure out her illness.

During rounds, J.D. announces to some of the interns that he is leaving. He forces Denise to give him a farewell message, and shoots down Sunny when she gives a legitimate farewell. Dr. Cox arrives to take over rounds, and ignored J.D.'s requests to hand off the imaginary reigns and torch. He is then informed that Mrs. Stonewater has Huntington's Disease, an incurable and genetic brain disease. He breaks the bad news to Dan, and also informs him that he is at risk for the disease.

Meanwhile, Dr. Kelso reveals to Carla and Ted that he has decided to spend his time working locum tenens, a practice that will force him to travel. He takes his last muffin from Donny and thinks about how he will be able to steal a memento from Coffee Bucks.

After getting 'dumped' by a patient on his last day, J.D. heads outside for some fresh air. He mistakes Dr. Kelso's farewell for his own. Dr. Kelso has stolen a table and two chairs from Coffee Bucks and tells him that he shouldn't expect a grand exit from the hospital, but offers his own sincere goodbye and handshake, then drives off. Inside, quickly after being told by Dan that he doesn't want to be tested for the brain disease, J.D. finds Dr. Cox and before he can demand a heartfelt goodbye, Dr. Cox tells him that J.D.'s last day is not special at all to him, which hurts J.D.

In the ward, Carla tells J.D. that she will miss him. He asks why she was always nice to him and she tells him that it was because he was "Bambi" and needed protecting. J.D. asks her what he can do to repay her, she tells him to tell her if Turk loves her more than J.D. he jokes that its about the same. Later, Ted attempts to tell J.D. goodbye and so does Jordan, but after being nice she picks on Ted. Back in the ward, Dr. Cox yells at Sunny about how to prescribe ibuprofen ("My First Day"). J.D. comments that he functions on a cycle, and realizes in his head that Dr. Cox is just a gruff teacher and has made him into the person he is today. Turk and Elliot then apologize to J.D. for the premature goodbye and moving in. He tells them that it is alright. He then asks Dan why he doesn't want the test, and Dan says that he doesn't want to be held down under any fear of the future.

After finding out the Janitor's real name, J.D. tells Dr. Cox goodbye, and Perry still doesn't give him a sincere parting moment. Sunny then comments that J.D. was just a mediocre doctor, which sparks Perry into ranting about how "John Dorian was the best that ever come through this dump," unfortunately for Dr. Cox, J.D. and Sunny had planned the entire thing and he hears the whole speech. J.D. thanks Sunny for helping him, and gives Dr. Cox a hug. Dr. Cox threatens Sunny, reminding her that she still works there and will pay for her involvement in J.D's plan.

As J.D. leaves Sacred Heart for the last time as an employee, he thinks back about how many people he has come into contact with. He thinks about family members such as Dan Dorian, co-workers such as The Todd, lost loves such as Jamie Moyer and Alex Hanson, people who passed away such as Jill Tracy and Patricia Wilk. He walks down the hallway to the exit and sees all people that have helped make him into the doctor who he was, all standing in line to say their sometimes strange farewells. At the door, he turns around and realizes it was just a fantasy. After walking through the door one last time, J.D. sees his future projected upon the "Goodbye J.D." banner: marrying Elliot, having another child, spending holidays with the Turks and Coxes, and seeing Izzy and Sammy get engaged. He then comments that his fantasies might come true, just this once.

The banner falls down and J.D. sees a custodian cleaning up at the end of the day. He bids farewell to J.D., seemingly unaware that it is his final day there as an employee. J.D. gets into his car and drives away from Sacred Heart Hospital.

Janitor reveals he has kept the penny that jammed the door on J.D.'s very first day and spends the episode trying to get J.D to admit that it was his fault. After using Denise in a poorly-acted reenactment, Janitor finally gets J.D. to confess, revealing that the penny fell out of his pocket into the door, causing the jam. Janitor reveals that he saw the entire event and that his 8 years of torment was punishment for J.D. failing the test of character.

Later, J.D. finally inquires about Janitor's real name, which turns out to be Glen Matthews. Janitor tells J.D. that all he had to do to find out his name was ask. After J.D. says his farewell and walks away, an orderly walks by and calls Janitor "Tommy".

Future of the characters

At the end of the episode, J.D.'s and his friends' future is shown across his leaving banner as a figment of his imagination, although he considers "Who's to say my fantasies won't come true, just this once?", suggesting that his future may in fact happen like he imagines. On his banner, the following things are shown: 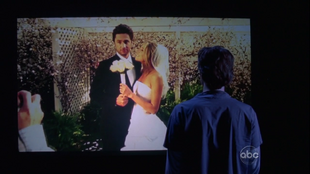 J.D. watches his future on his leaving banner 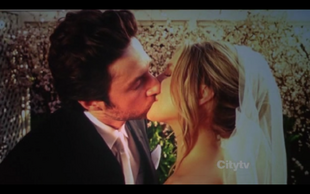 J.D. and Elliot kissing on their wedding day. 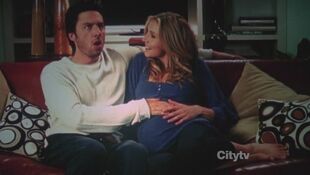 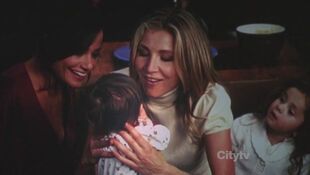 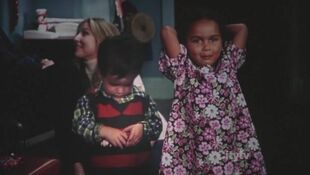 Young Sammy and Izzy playing together. 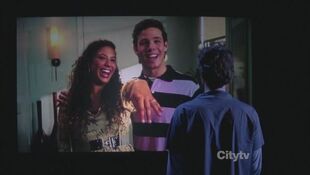 Sammy and Izzy getting engaged.

“Well long days are like pancakes... Admit it!”— Janitor

“You were Bambi, someone had to teach you how to walk.”— Carla's goodbye

“For the record he was the best that ever came through this dump. John Dorian was the first and only doctor I ever met who cared as much as I do, and you can forget about him being just an exceptional physician. Because the fact of the matter is, he's a damn exceptional person. That's why people gravitated toward him, that's why I did. He was my friend.”— Dr. Cox on J.D.

“It's okay, Perry. You just said how you feel. Honestly, I am so full of your love right now, I literally couldn't take another drop. Brace yourself, I'm coming in.”

“I guess it's because we all want to believe that what we do is very important, that people hang on to our every word, that they care what we think. The truth is, you should consider yourself lucky if you even occasionally get to make someone - anyone - feel a little better. After that, it's all about the people that you've let into your life. and as my mind drifted to faces that I've seen here before, I was taken to memories of family...”— J.D.

“You never called.”— Jamie Moyer
“I miss you.”— Alex Hanson

“Even of those who have left us.”

“There you are!”— Jill Tracy
“Hi tiger.”— Patricia Wilk

“And as I rounded that corner, they all came at me in a wave of shared experience.”

“Keep it holy, Q-tip”— Laverne
“Boing Fwip!”— The Worthless Peons
“I broke my penis again, but this time it was fun.”— Mike Davis
“Take care, bra! Take real good care.”— Lloyd
“I didn't kill her.”— Dr. Mickhead
“Way to leave a cherry gig, bra.”— Randall Winston
“I got me some white meat.”— Leonard
“Key party later. There'll be prostitutes.”— Dr. Zeltzer
“Did you ever go on that picnic? Make sure you do.”— Mrs. Tanner
“I hate you so much J.D.”— Lonnie
“It's like a baguette.”— Dr. Steadman
“Hooch is crazy.”— Hooch 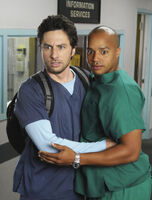