My Déjà vu, My Déjà vu is the twenty-second episode of the fifth season of Scrubs. As the episode title suggests, J.D. notices that things move in cycles around the hospital, creating a sense of déjà vu. Dr. Cox returns to Sacred Heart after his breakdown and toys with Elliot, while Carla makes a rule that Turk can't do anything she's not allowed to do while pregnant.

Dr. Cox returns to the hospital after his drunken breakdown over the death of three patients. J.D. notices that many things have begun to repeat themselves at Sacred Heart, including Dr. Cox making fun of J.D. for his "hairmet" ("My Lucky Night"), J.D. telling the Janitor and Troy a nickel riddle ("My Lucky Night"), Dr. Cox not treating Elliot as a real doctor, and Turk not being excited about the baby-related things Carla makes him do.

Elliot asks Dr. Cox for instructions on a patient, and he can't answer, making Elliot suspicious of his confidence. She tries reaching out to him and he pretends to go along, saying he has trouble making gut calls now. Eventually, he tells Elliot what medication to put the patient on. When Elliot informs Laverne of Dr. Cox's decision, she replies, "I know, he told me three hours ago." In the background, Dr. Cox is laughing and dancing. Elliot confronts him, saying that he has never had any respect for her as a doctor. He admits that he couldn't answer her question earlier because he was scared. This admission makes her feel more respected.

Meanwhile, J.D., Carla, and Turk are at the bar, and J.D. and Turk are obsessing over their drinks. This annoys Carla, who can't have alcohol because of her pregnancy. She snaps and makes a rule that Turk can't do anything she can't do pregnant. Later, she yells at Turk for riding an exercise bike, something she can't do. They argue until Carla starts to feel pain from her pregnancy. They go to the hospital, and the doctor assures Carla that she is fine. Turk apologizes and Carla says it's OK, that it was nice having Turk concerned for her. She says he can drink and do other things she can't do, but asks him not to do them around her.

Once again, J.D. tells the Janitor and Troy the nickel riddle (What two coins add up to 30 cents, and one of them isn't a nickel?), and they spend the whole episode trying to solve it. They finally conclude that it is a penny and a dime with a Roosevelt imperfection, today worth 29 cents. J.D. tells them at the end that it is a quarter and a nickel. The Janitor and Troy destroy his bike, and Janitor claims it's a riddle: "Two guys destroyed your bike, and one of them wasn't me." This makes J.D. remember what happened to his old bike. Throughout the episode, Troy acts stupid, mispronouncing words like strawberry ("strawbrerry") and library ("libary").

“Actually, it's not a helmet, it's a hairmet. It has extra room built in so you don't mess up your hairdo.”— J.D.

“Do you love it as much as I do?”— Dr. Cox
(wide grin; showing off his 'Welcome back Coxer' shirt to Elliot)
“Oh, your face is red like a strawbrerry.”— Troy 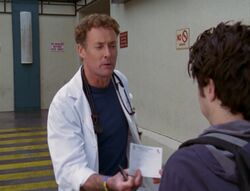 J.D. wears a hairmet, which prompts Dr. Cox to give him a prescription for testicles. ("My Lucky Night") 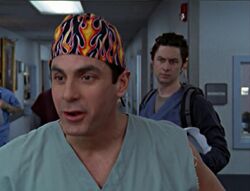 Todd responds to the "innuendo" complaint with "In your end-o". ("My Drama Queen") 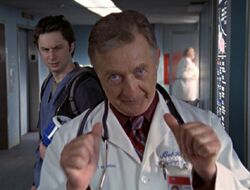 Dr. Kelso uses his "what has two thumbs and doesn't give a crap" joke. ("My Rule of Thumb") 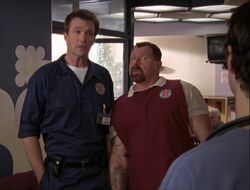 *J.D. gives the Janitor a riddle to distract him. ("My Lucky Night") 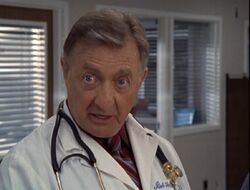 Dr. Kelso talks about the tattoo on his butt. ("My First Step") 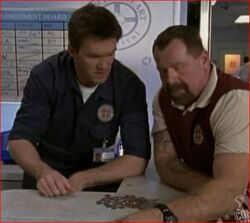 *Janitor comments that he went to Yale (changed from Harvard in the earlier episode). ("My Lucky Night") 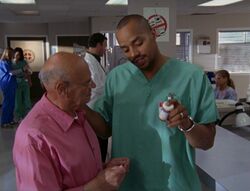 Turk says, "This is why your headache didn't go away. It is actually pronounced 'analgesic', not 'ANALgesic'. The pills go into your mouth."("My Fruit Cups") 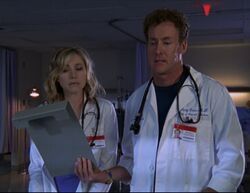 Dr. Cox and Elliot discuss whether to start thrombolytics on a patient, but this time their roles are reversed, with Dr. Cox having doubts. ("My Old Lady") Dr. Cox even says "I'll be right back" exactly like Elliot. 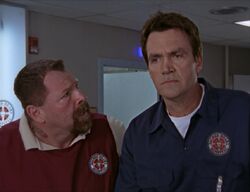 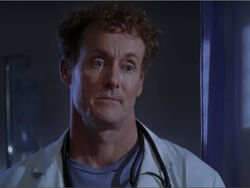 "It is so very important that people see me the way they used to — bulletproof."("My Bad") 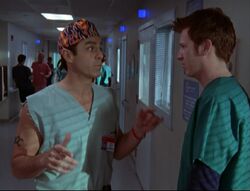 Todd claims that he is about to stop a breast reduction surgery. ("His Story") 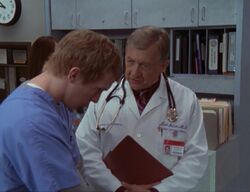 Dr. Kelso telling an intern (in this case, Lonnie) that they are just a large pair of scrubs to him. ("My First Day") 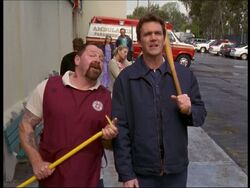 J.D.'s bike is ruined by Janitor and Troy. ("My Lucky Night")
Add a photo to this gallery

Retrieved from "https://scrubs.fandom.com/wiki/My_Déjà_vu,_My_Déjà_vu?oldid=73501"
Community content is available under CC-BY-SA unless otherwise noted.