“Sean, you and I have had sex with the same women. Therefore, we are wiener cousins.”— J.D.

"My Cuz" is the sixteenth episode of Scrubs' eighth season. Turk applies for and gets the Chief of Surgery position. Kelso contracts a strain of the flu and while treating himself realizes that he misses being a doctor. J.D. realizes that he's just a part-time father and thinks about moving closer to Sammy and Kim.

J.D. drives to Kim's apartment to drop Sammy off. A jealous Elliot tags along to make sure Kim doesn't touch him. When she does, which J.D. usually instigates, they have car-sex on the way home. At Kim's apartment, she reveals that she's now dating a guy Elliot introduced - Sean Kelly. The next day, Elliot comments on how awkward the couples are around each other, so she has invited Sean and Kim to the hospital to work out their problems. Kim and Elliot easily get past their issues, but it takes some convincing for J.D. and Sean to come to terms. J.D. eventually suggests they should be friendly because they are "wiener cousins" for having slept with the same women. When he hands off a crying Sammy to Sean, the baby stops crying. J.D. gets upset and tries to find out why Sammy cries for J.D. but not Sean. After figuring out it was his cologne, J.D. watches home movies of Sammy and Kim. He decides he wants to move closer to Kim so he can spend more time with Sammy.

Dr. Kelso is admitted to Sacred Heart as a patient when he finds out that the muffins he has eaten have given him the stomach flu. He is also concerned about a starfish he may have eaten in the Bahamas when he was drunk and dared to eat it by Janitor. He refuses to allow Howie to treat him, and always comes up with excuses for Sunny to leave the room. He self-administers treatment and in the end is caught by Dr. Cox and Carla. Cox tells him that he left the game so he can't practice anymore, but he can still give advice. Kelso then advises Cox on who to give the Chief of Surgery position to.

Meanwhile, Dr. Cox is having problems filling the role of Chief of Surgery. He jokes that a chimp would be better than any "scalpel jockey" at Sacred Heart. Turk mentions to Carla that he is qualified, and she convinces him to go for it. He harasses Dr. Cox and a large majority of the hospital staff, including Todd and Janitor tell Cox to give the job to Turk. Because Dr. Cox thinks Turk is too childish, he refuses to concede. Turk enlists Carla's help and she tells him to not make it personal. Dr. Cox later congratulates Turk on his new promotion to Chief of Surgery.

The Janitor wants Turk to become Chief of Surgery so he can make him a special "Chief Hat". He originally planned to make it like an old scuba helmet but ended making a flamboyant "slightly pimpish" top hat. When Turk refuses to take it off because he likes it, Janitor gets upset and asks for it back. Janitor also is forced to guard the door while Kelso self-treats due to "the bond that can't be broken," meaning that Janitor and Kelso are also "wiener cousins."

“I never agreed to that.”

“You beautiful son of a bitch!”

“Kim and I are Bajingo sisters.”— Elliot

“You've always wanted one of those!”

“The bond that can't be broken.”— Janitor

“Whoa! Weird flashback, like the Ghost of Couples' Past.”— Sean Kelly 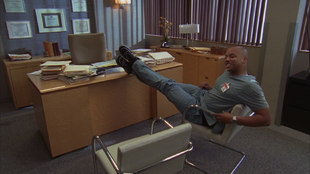 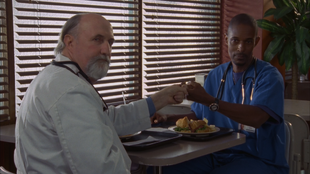 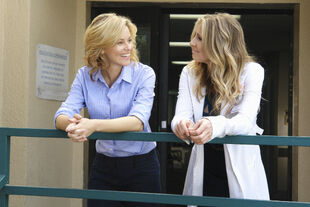 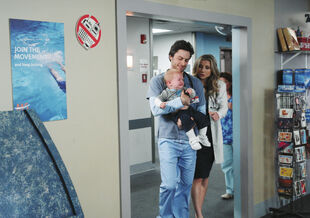 Sammy crying as J.D. holds him. 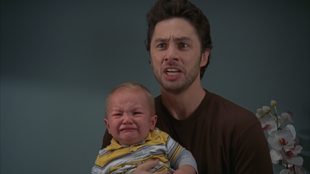 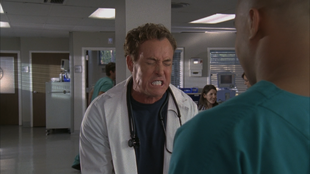 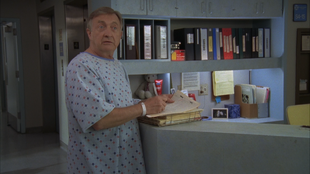 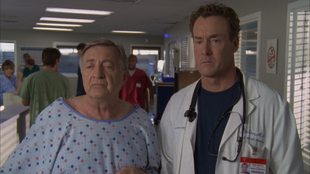 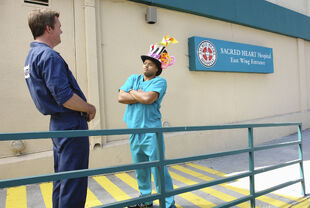