“Like most hospitals, Sacred Heart makes their interns put on a sketch show roasting the senior staff. It was never any good, but this year it would be.”— J.D.

"My Comedy Show" is the tenth episode of Scrubs' eighth season. J.D. and Turk organize a comedy show featuring the interns which results in them feeling insecure about their friendship. Denise and Sunny try to get Elliot to help a patient's mother let the patient be a normal teenager. Carla disillusions the Janitor.

In the classroom, J.D. and Turk inform the interns that they are not funny, but that J.D. and Turk are comic geniuses. They plan the sketch show that had run for at least the past eight years, and J.D. dedicates this performance to Nurse Roberts, who had died two years earlier. ("My Long Goodbye") At another meeting, they hand out parts and tell the interns to partner up, but nobody wants to partner with Denise, except for Sunny. Later, at the show, several skits are performed including Howie as The Todd, an intern as Dr. Kelso, Katie as Dr. Beardface, and an intern as Dr. Wen and Jimmy performing impressions of Owen Wilson, Jack Black, Brad Pitt, and Dane Cook. The final act is Sunny and Denise playing J.D. and Turk, who have not yet rehearsed, due to being occupied by a patient. They make it up as they go, and end up making out, mocking J.D. and Turk's friendship, which makes J.D. and Turk uncomfortable.

The next day, J.D. and Turk are very distant and do not participate in the tradition of "Eagle!". At lunch, J.D. calls their friendship a "bromance", and Turk decides that at the hospital they need to be more professional. However, when Turk learns that an old article of his is getting published, he and J.D. can't help but hug.

Meanwhile, Carla discovers a hair on her chest, and Dr. Kelso and Janitor witness her pluck it. The next day, Janitor attempts to blackmail her, but she pretends that it never happened. Janitor attempts to recruit Dr. Kelso in confirming the event, but Kelso played Janitor off as delusional, as he was already recruited by Carla to deny the event. Carla tells the Janitor that he makes a lot of stuff up such as building a giant sand castle ("My Five Stages") or hanging J.D. up like a flag. ("My Mirror Image") He later is depressed that he doesn't know what is real in his life, and even questions if he was in The Fugitive. ("My Friend the Doctor") He apologizes to Carla for accusing her of the chest hair, and she forgives him, admitting to herself that it was easier than she thought it would be to convince him it never happened.

At the same time, Elliot has a problem convincing Denise to take a night off and go drinking with her friends. The two ladies and Sunny have a patient, Brianna Tarasi that is always in the hospital. Denise and Sunny eventually tell her mother Lulu Tarasi off, saying that Brianna needs a life. The mother is upset and tells them that they have no idea what it is like trying to protect her ill daughter, and that Dr. Reid had already given her the same argument. Denise is upset that Elliot tricked her into arguing with Lulu, but Elliot turns the argument around and tells Denise that it is her who needs to go out and have a life. That night, Denise joins Katie, Howie, and some other interns for drinks at a bar.

The Janitor first sees Carla pluck a hair from her chest. After referring to it the next day, Carla says that she and him never met that day. He spends the whole episode trying to get Carla to admit the incident happened, but comes to a gradual realization that maybe parts of his life were just conjured up by his imagination. Carla later reveals (not to the Janitor) that she really did pluck a hair from her chest.

“I'm going to kill you with a hammer.”— Denise to Sunny

“That is one long-ass booby hair.”— Dr. Kelso

“I have been called the black Wayne Brady.”— Turk

“OK people, before we begin, you need to accept one simple truth. We are funny, and you are not.”— J.D. 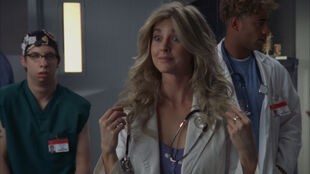 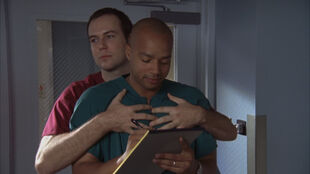 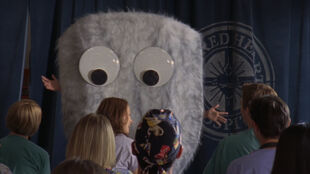 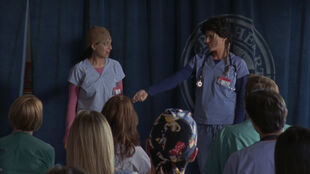 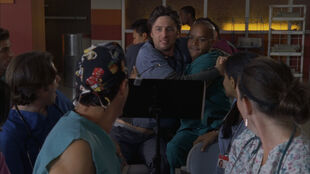 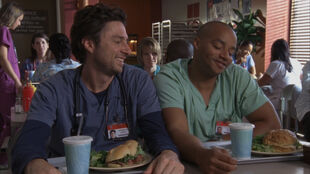 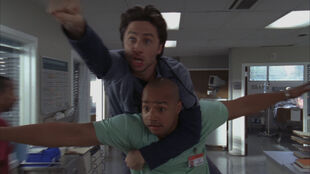 Add a photo to this gallery
Season Eight Episodes

Retrieved from "https://scrubs.fandom.com/wiki/My_Comedy_Show?oldid=73533"
Community content is available under CC-BY-SA unless otherwise noted.